Carmen Kass is an Estonian model who is considered one of the world’s top fashion models. She is best known for her work as a Victoria’s Secrets lingerie model. She appeared in Victoria’s Secret Fashion Show in 1999, 2000, 2002, 2003 and 2008, and has worked as the face of Versace, Valentino, Chanel, Calvin Klein, Ralph Lauren, Yves Saint Laurent, Gucci, Chloé, Dior, Céline, Givenchy, and, for ten consecutive years, Michael Kors. She has also appeared and been featured on the cover of a number of international fashion magazines including Vogue, Elle, Image, Numéro, and Madame Figaro. She was named “Model of the Year” at the 2000 VH1/Vogue Fashion Awards. Born on September 14, 1978 in Tallinn, Estonia, to parents Koidu Põder and Viktor Kass, she has two older siblings, a sister named Victoria, and a brother, Kutty. She studied acting at Lee Strasberg Theatre and Film Institute in Manhattan, New York City. Kass was discovered in 1992 by an Italian modeling agency in a supermarket in her hometown at the age of 14. In late 2004, she began dating German chess player of American descent, Eric Lobron. She was previously in a relationship with restaurant owner Richie Akiva from 1998 to 2004. 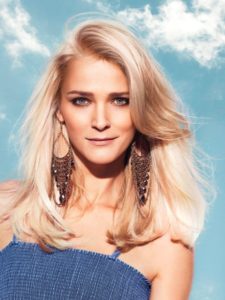 Carmen Kass Facts:
*She was born on September 14, 1978 in Tallinn, Estonia.
*At 14, she was discovered in a supermarket by a model scout.
*She appeared in five Victoria’s Secret Fashion shows.
*She first appeared in Victoria’s Secret Fashion Show in 1999.
*She appeared in the Pirelli calendar in December 2001.
*She enjoys playing chess.
*She is good friends with fellow models Angela Lindvall, Ann Catherine Lacroix, Karolina Kurkova, Luke Worrall, Natalia Vodianova, Colette Pechekhonova, Carolyn Murphy, Daria Werbowy, Erin Wasson, Oluchi Onweagba, and Yasmin Warsame.
*She is close friends with the Brazilian model, Gisele Bündchen.
*She speaks Estonian, English, and some Russian and Italian.
*Visit her official website: www.carmenkass.com
*Follow her on Twitter, Facebook and Instagram.