Canadian actress Carrie-Anne Moss who rose to stardom with role of Trinity in The Matrix trilogy. She is also known for her roles as Lucinda Scott on F/X: The Series and as Carrie Spencer in Models Inc. Her other notable film credits include Memento, Chocolat, Fido, Snow Cake, Disturbia, Silent Hill: Revelation and Pompeii. Born in Burnaby, British Columbia, Moss is the daughter of Barbara and Melvyn Moss. She has an older brother named Brooke. She has been married to American actor Steven Roy since 1999. They have three children: daughter, Frances Beatrice, and two sons, Owen, and Jaden Roy. 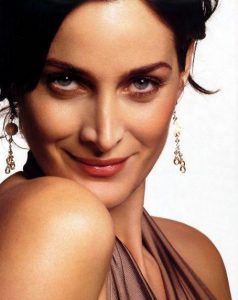 Carrie-Anne Moss Education:
She graduated from Magee Secondary School in Vancouver, B.C., Canada.
She attended and graduated from American Academy of Dramatic Arts in 1988.

Carrie-Anne Moss Facts:
*She was born on August 21, 1967, in British Columbia, Canada.
*At age 11, she joined the Vancouver children’s musical theatre.
*She was named after The Hollies’ 1967 song “Carrie Anne”, which was on the charts when she was born.
*She was the first member of her family to leave Canada.
*Follow her on Twitter, Facebook and Instagram.