CarryMinati is an Indian YouTuber and streamer, best known for his rants of viral videos on his YouTube channel ‘CarryMinati’, where he has more than 22 million subscribers and growing. He also has a secondary channel for streaming, titled ‘CarryIsLive’, with 5.77 million subscribers. He rose to prominence by making roasting YouTube videos with game play clips under his alias name, CarryMinati. He is mainly involved in creating diss songs, satirical parodies and comedy, apart from live gaming. Born Ajey Nagar on June 12, 1999 in Faridabad, India, he began posting videos on YouTube since he was 10 years old. Nagar attended school till 2016, when he dropped out to pursue his YouTube career; he decided to skip his Class-XII Board examination after feeling unconfident about the economics examination, and later completed it through distance learning. 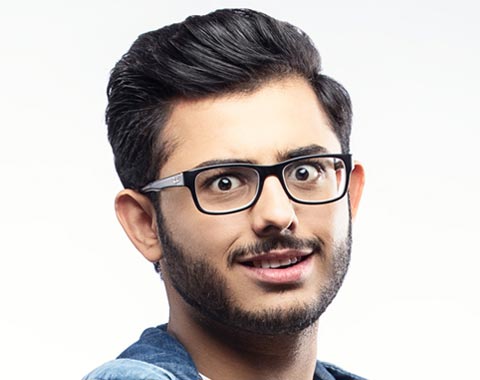 CarryMinati Facts:
*He was born on June 12, 1999 in Faridabad, India.
*His real name is Ajey Nagar.
*He began his YouTube channel in 2014.
*He became one of the fastest growing YouTube channel in India when he scored whooping 50,000+ subscribers in the month of July 2016.
*In 2017, he started his another YouTube channel, “CarryIsLive“.
*For his roasts and rants, he has taken inspiration from American YouTuber Leafyishere.
*He was named among TIME magazine’s ’10 Next Generation Leaders’ in May 2019.
*Follow him on Twitter, Facebook, YouTube and Instagram.