Casemiro is a Brazilian professional footballer who plays for Spanish club Real Madrid and the Brazil national team as a defensive midfielder. He was part of the Real Madrid squad that won four Champions Leagues, from 2013–14 to 2017–18. He spent a season on loan at Porto (2014–2015). He was in Brazil’s squad at three Copa América tournaments as well as the 2018 FIFA World Cup, winning the 2019 Copa América. Born Carlos Henrique Casimiro on February 23, 1992 in São José dos Campos, State of São Paulo, Brazil, he has a sister Bianca and brother Lucas. A product of São Paulo FC’s youth system, Casemiro scored 11 goals in 112 official games, and moved to Real Madrid in 2013. He is married to Anna Mariana Casemiro. 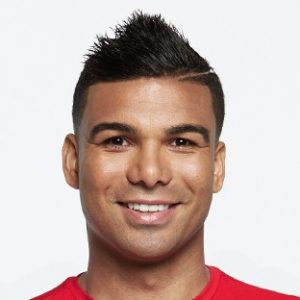 Casemiro Facts:
*He was born on February 23, 1992 in São José dos Campos, State of São Paulo, Brazil.
*His full name is Carlos Henrique Casimiro.
*He began his youth soccer career in 2002 as a member of the Sao Paolo football club.
*He made his Série A debut on July 25, 2010.
*He featured in a promotional trailer for FIFA 19.
*His wife, Anna, is a makeup artist.
*Follow him on Twitter, Facebook and Instagram.