Cat Cora is an American professional chef, writer, and media personality. She is best known as an Iron Chef on the Food Network television show Iron Chef America and as co-host of Around the World in 80 Plates on Bravo. Cora appeared as a guest chef of Eastbound & Down in 2013. She is also Executive Chef for Bon Appétit magazine and a UNICEF spokesperson. 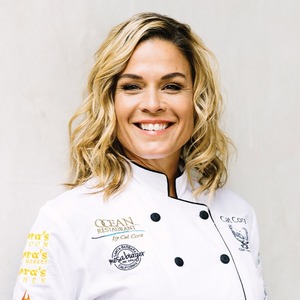 Born Catherine Ann Cora on April 3, 1967 in Jackson, Mississippi, to parents Virginia Lee (née Brothers) and Spiro Pete Cora, she is of Greek descent on her father’s side. Cora started culinary school after graduating from the University of Southern Mississippi. She and her partner, Jennifer, had four sons together via in vitro fertilization. The couple married in 2013, but announced their divorce in 2015. On April 21, 2018, Cora married record producer executive Nicole Ehrlich.

Cat Cora Facts:
*She was born on April 3, 1967 in Jackson, Mississippi, USA.
*She came out as gay at the age of 19.
*She made television history in 2005 as the first female Iron Chef, joining Bobby Flay, Mario Batali and Masaharu Morimoto on the first season of Food Network’s “Iron Chef America”, spending 10 seasons on the show.
*She states that her influences include Julia Child, M. F. K. Fisher, and Barbara Tropp.
*Visit her official website: www.catcora.com
*Follow her on Twitter, Facebook and Instagram.