Catherine Tresa is an Indian actress and model, active primarily in Tamil, Telugu, Malayalam, and Kannada films. She is best known for her role as Kalaiarasi in 2014 Tamil film Madras. Her other notable film roles include 2012’s Kannada film Godfather, 2013’s Telugu film Iddarammayilatho, 2013’s Telugu film Chammak Challo, and the 2016 Tamil film Kathakali. She made her acting debut in the Kannada film Shankar IPS which was released in 2010. She was born Catherine Tresa Alexander on September 10, 1989 in Dubai, United Arab Emirates into a Roman Catholic family. Her parents are Tresa Alexander and Frank Mario Alexander. She completed her schooling in Dubai and briefly attended St. Joseph’s College, Bangalore. 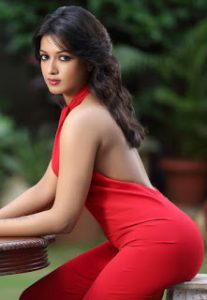 Catherine Tresa Facts:
*She was born and raised in Dubai.
*While growing up, she trained singing, dancing, ice skating and debating.
*Her brother Christoper committed suicide by hanging himself in his room in Benguluru on December 10, 2014.
*Follow her on Twitter and Facebook.