R&B singer Chaka Khan is best known for her superb 1984 cover of Prince’s “I Feel for You.” Her other single hits are “I Feel for You,” “Ain’t Nobody,” “I’m Every Woman,” and “Through the Fire.” Chaka Khan, who became known as ‘the Queen of Funk,’ was born as Yvette Marie Stevens in Great Lakes, Illinois, USA. 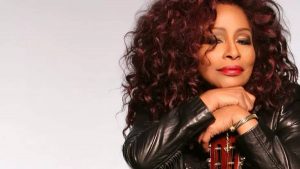 Chaka Khan Facts:
*She acquired the name Chaka Khan when she joined the Black Panther Party.
*Chaka means “fire” in many African languages!
*She has won ten Grammys and has sold an estimated 70 million records worldwide.
*She was at number 17 on VH1’s 100 Greatest Women of Rock N Roll.
*She is friends with the late Natalie Cole.
*In the the mid 80’s Chaka dated a school teacher.
*Follow her on Twitter, Facebook, Google+, YouTube, and Instagram.