Chanel West Coast is an American rapper, singer, model, actress and television personality. She rose to stardom with roles in MTV’s Rob Dyrdek’s Fantasy Factory and Ridiculousness. She has collaborated with popular music artists such as Lil Wayne, French Montana, Robin Thicke, and Snoop Dogg. She was featured in Mike Posner’s “Cooler Than Me” music video. She released her debut mixtape, Now You Know in July 2013. She released her 2nd mixtape WAVES featuring YG and B-Real. Born Chelsea Chanel Dudley on September 1, 1988 in Los Angeles, California, USA, she spent most of her growing years between New York City with her father and North Hollywood with her mother. Her father was a DJ, and she developed an interest in music at a young age. She began rapping at the age of fourteen. She dated Scottish singer Liam Horne from 2014 to 2017. 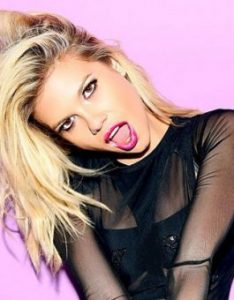 Chanel West Coast Facts:
*She was born on September 1, 1988 in Los Angeles, California, USA.
*Her real name is Chelsea Chanel Dudley.
*While growing up, she took singing and dancing classes.
*She cites “How Do U Want It” by Tupac Shakur as the song that inspired her to start rapping.
*Visit her official website: www.iamchanelwestcoast.com
*Follow her on Twitter, YouTube, SoundCloud, Facebook and Instagram.