Spanish-American actress and singer who is known for her sexy outfits, Latin sassiness, and her hits like ‘Dance A Little Bit Closer’. Her flamenco inspired platinum album, “Guitar Passion,” won the Female Pop Album of the Year at the Billboard International Latin Music Conference and reached platinum status worldwide. Charo was born to a lawyer and a homemaker on March 13, 1941 in Murcia, Spain as María del Rosario Mercedes Pilar Martínez Molina Baeza. Since August 11, 1978, she has been married to Kjell Rasten. They have a son together. She was previously married to Xavier Cugat. 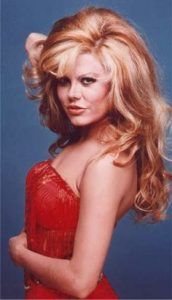 Charo Facts:
*She started playing guitar since she was 9 years old.
*At age 64, she married Xavier Cugat in order to legally enter the United States.
*She became a US citizen in 1977.
*She speaks Spanish, English, French, Italian and Japanese fluently.
*Follow her on Facebook and Instagram.