Chevy Chase was born Cornelius Crane Chase on October 8, 1943 in Lower Manhattan, New York, to Cathalene Parker and Edward Tinsley. He is an actor and Comedian who was a part of the Saturday Night Live (1975) cast from its debut until 1976, and then embarked on a highly successful movie career. He also starred in a number of films, including Spies Like Us, Seems Like Old Times, Vacation, Caddyshack, Foul Play and Fletch. He also appeared in the music video and sang in the choir on the song “Voices That Care.” His parents were both from prominent families. His father was a prominent book editor and his mother was a concert pianist. 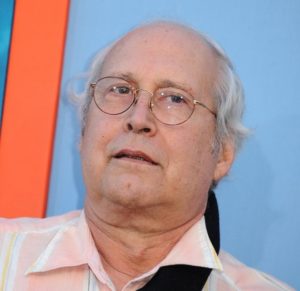 Chevy Chase Facts:
*He plays piano, drums and saxophone.
*His daughter Caley Chase is also an actor.
*He was born on the same day as R.L. Stine.
*He has a fear of snakes.
*He is a huge jazz fan.
*He wanted to be a doctor when he was younger.
*He played Pierce Hawthorne on the comedy series Community from 2009 to 2014.
*Follow him on Twitter and Facebook.