Chloe Madeley is a British television presenter, journalist, model, and fitness personality who served as a presenter on the reality show, Big Brother’s Big Mouth with her brother Jack. She competed in the reality show, Dancing on Ice in 2011. In July 2013, she launched FitnessFondue.com, a fitness and nutrition advice website. She placed fifth in the second season of the British reality series The Jump in 2015. Born Chloe Susannah Madeley on July 13, 1987 in Manchester, England, she is the daughter of Richard Madeley and Judy Finnigan. She was educated at King Alfred School in Hampstead, in North West London and attended Leeds Trinity & All Saints College. In October 2015, she began dating rugby union player James Haskell. 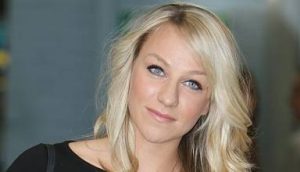 Chloe Madeley Facts:
*She was born on July 13, 1987 in Manchester, England, UK.
*She is the daughter of Judy Finnigan and Richard Madeley.
*She first achieved fame after her stint as a presenter for Big Brother’s Big Mouth.
*She attended the Royal Wedding of Prince Harry & Meghan Markle with fiancé James Haskell, which was held on 19 May 2018 in St George’s Chapel at Windsor Castle in the United Kingdom.
*Follow her on Twitter and Instagram.