Chris Carmack is an American actor, singer and former fashion model. He is best known for his roles as Luke Ward in the television series The O.C. and as Will Lexington in the ABC/CMT musical drama series Nashville. Carmack also had a recurring role as Alex Brody on the WB drama Related. His films credits include The Butterfly Effect 3: Revelations, Love Wrecked, Into the Blue 2: The Reef, Beauty & the Briefcase and Alpha and Omega. Born James Christopher Carmack on December 22, 1980 in Washington, District of Columbia, USA, he grew up in Rockville, Maryland. He has two siblings, a sister and brother. Following graduation from Magruder High School, he enrolled at New York University to pursue an Arts degree at the Tisch School but left after he was discovered by John Yannella, a modeling scout. He has been married to Erin Carmack since October 19, 2018. Together they have one daughter. 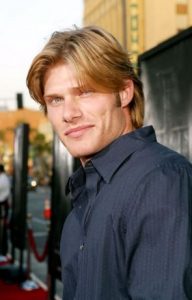 Chris Carmack Facts:
*He was born on December 22, 1980 in Washington, District of Columbia, USA.
*He played varsity baseball, football, basketball and wrestling in high school.
*He plays the guitar and saxophone.
*Visit his official website: www.chriscarmackmusic.com
*Follow him on Twitter, Facebook and Instagram.