Christie Brinkley is an American model, actress, writer and designer. Brinkley came to fame during the 1970s, appearing on hundreds of magazine covers, most notably a series of Sports Illustrated swimsuit issues. She spent 25 years as the face of CoverGirl cosmetics, and appeared on over 500 magazine covers. She was one of three models featured as dolls produced by Matchbox Toys called “The Real Model Collection”. In 1983, she released her book “Christie Brinkley’s Outdoor Beauty and Fitness Book.” Born Christie Lee Hudson on February 2, 1954 in Monroe, Michigan, USA, to Marjorie and Herbert Hudson, she was adopted by stepfather, television writer Don Brinkley. She is a 1973 graduate of e Lycée Français de Los Angeles. She studied art in Paris. She was “discovered” in 1973 by American photographer Errol Sawyer in French post office. Her first Sports Illustrated Swimsuit Issue cover was in 1979. Her first role as an actress was in the 1983 film National Lampoon’s Vacation. She has been married four times and is the mother of three children, including Alexa Ray Joel. 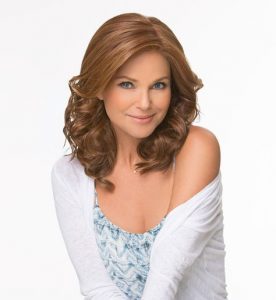 Christie Brinkley Facts:
*She was born on February 2, 1954 in Monroe, Michigan.
*She was adopted by stepfather, Don Brinkley.
*She adorned 3 consecutive Sports Illustrated Swimsuit Issue covers from the late 1970s to 1981.
*She supports PETA and is a vegetarian since the age of 13.
*She is a fan of New York Islanders ice hockey team.
*Visit her official website: www.christiebrinkley.com
*Follow her on Twitter, Facebook and Instagram.