Christy Turlington is an American-Salvadoran supermodel who has appeared in campaigns for many important fashion houses such as Calvin Klein, Maybelline, Chanel, Yves Saint Laurent, Donna Karan, Prada, Valentino, Versace, Louis Vuitton, Bally, Jason Wu, Max Mara, Escada, Michael Kors, and Marc Jacobs. She has been appeared on over 500 magazine covers during her lengthy career. Born Christy Nicole Turlington on January 2, 1969 in Walnut Creek, California, to María Elizabeth, a flight attendant from El Salvador, and Dwain Turlington, a pilot for Pan American World Airways, she is the middle child of three and has two sisters named Erin and Kelly. Christy was discovered by a local photographer, Dennie Cody in Miami, Florida, while riding horses. She attended Monte Vista High School in Danville, California and earned a Bachelor of Arts degree in Comparative Religion and Eastern Philosophy from the Gallatin School of Individualized Study of New York University. She has been married to Edward Burns since 2003. They have two children, Grace and Finn. Her sister Kelly is married to Edward’s brother Brian Burns. 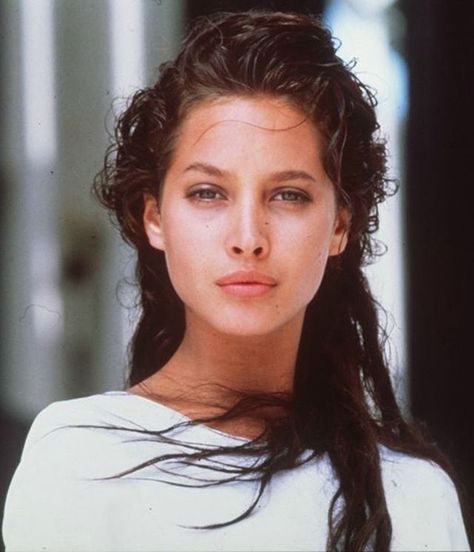 Christy Turlington Facts:
*She was born on January 2, 1969 in Walnut Creek, California, USA.
*Her father was British commercial pilot and her mother was a Salvadoran flight attendant.
*She grew up in Danville, California.
*She started modeling after school from age 14 to 16.
*She graduated from New York University with a degree in Comparative Religion and Eastern Philosophy (1999).
*She holds a Master’s Degree in Public Health from Columbia University.
*She was discovered by California photographer Dennie Cody while she was riding a horse in Miami, Florida.
*People Magazine named her one of the top 50 Most Beautiful People in the World in 1993.
*She appeared in the 1995 Pirelli Calendar.
*She was named one of Glamour’s Women of the Year in 2013.
*She was included on the annual Time 100 list of the most influential people in the world 2014.
*She has climbed the mountain range Mount Kilimanjaro.
*She is fluent in both English and Spanish.
*She enjoys Yoga and horseback riding.
*She is friends with fellow models Bono, Cindy Crawford, Claudia Schiffer, Linda Evangelista, Naomi Campbell, Stephanie Seymour, Elle Macpherson, Emily DiDonato, Joy Bryant, Kate Moss, Tatjana Patitz, and Yasmin Le Bon.
*She is the founder of everymothercounts.org.
*Visit her official website: www.christyturlington.com
*Follow her on Twitter, Facebook and Instagram.