Martial artist and actor who has starred in a wide number of action films, and is best known for his starring role as Ranger Cordell Walker in the television series Walker, Texas Ranger, from 1993 to 2001. He starred alongside Bruce Lee in the 1972 film, Way of the Dragon. His other notable film credits include The Hitman, The Delta Force, Missing in Action and its sequels, Sidekicks, and Firewalker. He was born Carlos Ray Norris on March 10, 1940 in Ryan, Oklahoma, USA. He is the eldest of three children of his parents Wilma and Ray Norris, and brother to Wieland and Aaron. He has founded two of his own martial arts: Chun Kuk Do and American Tang Soo Do. 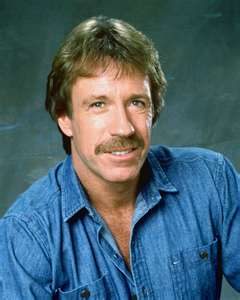 Chuck Norris Facts:
*He is the eldest of three children of his parents.
*His father was a truck driver, mechanic, and bus driver, and was killed in a car accident.
*He served in the U.S. Air Force.
*Often trained with Bruce Lee.
*He started studying martial arts in Korea in the 1950s.
*He holds a 10th degree black belt in Tang Soo Do, and also an 8th degree black belt in Tae Kwon Do…that is, the Korean styles of each.
*He campaigned for Mike Huckabee for the 2008 primary election.
*He owns a karate studio in Norfolk, Virginia.
*Follow him on Twitter and Facebook.