Cinta Laura is an Indonesian-German actress, electropop singer and model whose first single “Oh Baby” reigned in the number position of various charts in Indonesia, Malaysia and Brunei Darussalam. Her success lead her to become the face of several local and international brands. Over the span of her career, she has won several awards for acting and singing, two of which are from the Nickelodeon Kids Choice Awards. Cinta was born on August 17, 1993 as Cinta Laura Kiehl in Quakenbrück, Germany, the daughter of Michael Kiehl, a German hotelier, and Herdina Kiehl, an Indonesian lawyer. She is of Sundanese descent on her mother’s side. She has a younger sister. 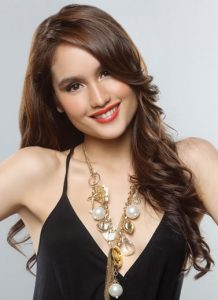 Cinta Laura Facts:
*Her debut single, Oh Baby was from the soundtrack of her film, ‘Oh Baby’.
*Her first album sold over a million copies from sales in Indonesia, Malaysia and Brunei.
*She studied at Columbia University, where she obtained her degree in psychology.
*She was awarded SCTV Awards in the category “Greatest Hits Actress” in 2007.
*Follow her on Twitter, Facebook and Instagram.