Claudelle Deckert is a German actress and model. She is best known for playing the role of Eva Wagner in the German soap opera Unter Uns since 2017 with a two-year break between 2006 und 2008. In 2013 she was a contestant on the seventh season of the German reality show Ich bin ein Star – Holt mich hier raus!, which is the German version of I’m a Celebrity…Get Me Out of Here!, where she finished in third place. In February 2013, Deckert posed for the German edition of Playboy magazine. Born on January 25, 1974 in Düsseldorf, Germany, she has one brother. In May 2013, Deckert married Oliver. She has a daughter with Düsseldorf-based photographer Tom Lemke. 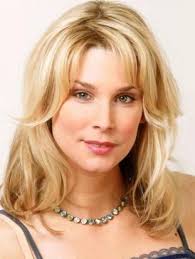 Claudelle Deckert Facts:
*She was born on January 25, 1974 in Düsseldorf, Germany.
*Best known for her performance in the popular series Unter Uns.
*In 2013 she took part in the German reality show Ich bin ein Star – Holt mich hier raus!, where she finished in third place.
*She appeared in the German edition of Playboy in the February 2013 issue.
*Visit her official website: www.claudelleloves.com
*Follow her on Facebook and Instagram.