Clint Bowyer is an American professional stock car racing driver who currently competes full-time in the Monster Energy NASCAR Cup Series, driving the No. 14 Ford Mustang for Stewart-Haas Racing. He won the Nationwide Series championship driving for RCR in 2008. Born Clinton Edward Bowyer on May 30, 1979 in Emporia, Kansas, USA, to parents Jana and Chris Bowyer, he has two brothers named Casey and Andy. He began his racing career at the age of 5, racing motocross. He has been married to Lorra Bowyer since 2014. They have two children. 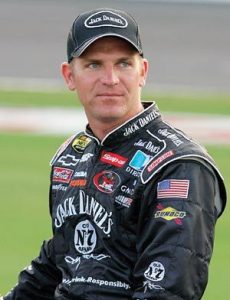 Clint Bowyer Facts:
*He was born on May 30, 1979 in Emporia, Kansas, USA.
*He began racing at the age of five in motocross.
*He won the Prelude to the Dream race in 2011.
*He is an avid fan of the Kansas City Royals of the MLB, the University of Kansas Jayhawks of the NCAA, and the Kansas City Chiefs of the NFL.
*Visit his official website: www.clintbowyer.com
*Follow him on Twitter and Facebook.