Constance Jablonski is a French fashion model who entered the French Elite Model Look Contest in 2006. In 2010, Jablonski became one of the newer faces of Estée Lauder alongside Liu Wen and Joan Smalls. She has appeared in six Victoria’s Secret Fashion shows from 2010 through 2015. She has appeared in campaigns for many important fashion houses such as Alberta Ferretti, Cesare Paciotti, D&G, Donna Karan, Calvin Klein, Topshop, Tse, H&M, Bally, GAP, Moschino, Hermes, Nine West, Majestic Filatures, Max Mara, Barneys, United Colors of Benetton, Estee Lauder, and Y-3. Jablonski has also appeared on the cover of fashion magazines such as Vogue, Harper’s Bazaar, Russh, Marie Claire, Allure, and Vanity Fair. She is represented by the agencies DNA Model Management (New York), VIVA Model Management (Paris, London, Barcelona), and IBTM (Amsterdam). Born Constance Marie Jeanine Jablonski on April 17, 1991 in Lille, France, she is of Polish descent on her father’s side, and of French descent on her mother’s side. She has an older brother named François. Jablonski was discovered in 2006 when she entered the French Elite Model Look Contest and got her first chance to do a catwalk in September 2008 in New York, Paris and Milan fashion weeks. In 2016, Jablonski began dating photographer Vicen Akina. She was previously in a relationship with Imad Izemrane (2011). 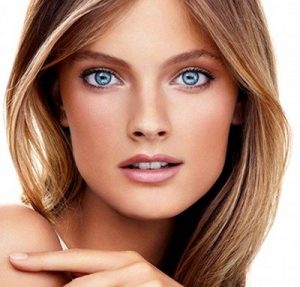 Constance Jablonski Facts:
*She was born on April 17, 1991 in Lille, France.
*She belongs to both French and Polish descent.
*She wanted to be a tennis player before becoming a model.
*She began her modeling career in 2006.
*She signed with Estée Lauder in 2010.
*She was ranked #11 on the Top Female Model list by models.com in 2015.
*She is friends with Jen Messelier, Sigrid Agren, Tara Gill, Suzie Bird, Charlotte di Calypso, Yulia Leontieva, Nicolas Ripoll, Eniko Mihalik, Gracie Carvalho, Joan Pedrola, and Othilia Simon.
*Follow her on Twitter and Instagram.