Courtney Sixx is an American model, producer, and entrepreneur, best known for hosting How2Girl Radio on iheartradio. She is the wife of Motley Crue bassist Nikki Sixx. Born Courtney Erica Bingham on September 5, 1985 in Santa Monica, California, she was raised in Los Angeles. Courtney began modeling in high school and signed with Wilhelmina Models when she was just 17 years old. In March 2014, she married Motley Crue bassist Nikki Sixx. She has a daughter named Ruby born in 2019. She has also four step-children: Gunner, Frankie, Decker, and Storm. 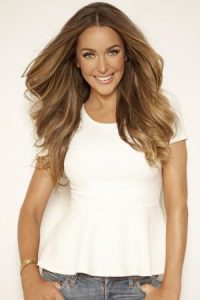 Courtney Sixx Facts:
*She was born on September 5, 1985 in Santa Monica, California, USA.
*Her birth name is Courtney Erica Bingham.
*She grew up in Los Angeles.
*At 17, she was signed by Wilhelmina Models.
*She launched the How 2 Girl blog in 2012.
*She teamed up with Home Depot for their Let’s Do This campaign in November 2013.
*Visit her official website: www.courtneysixx.com, www.how2girl.com
*Follow her on Twitter, YouTube, Facebook and Instagram.