Actress Crystal Bernard is best known for her portrayal of Helen Chappell in the TV series Wings for seven years. She is also known for her role as Amy Tompkins on the sitcom It’s a Living. Outside of acting, she has also pursued a music career as a singer-songwriter. Her albums include The Girl Next Door and Don’t Touch Me There. Born Crystal Lynn Bernard in Garland, Texas, on September 30, 1961, to Jerry Wayne Bernard and Gaylon Fussell, she grew up in the Oak Creek Village subdivision in Houston, Texas and began singing with her father at revivals in the early 1970s. She has three sisters, Robyn, Angelique and Scarlett Bernard. She is a graduate of the Spring High School. She was previously in a relationship with producer Tony Thomas, son of Danny Thomas. 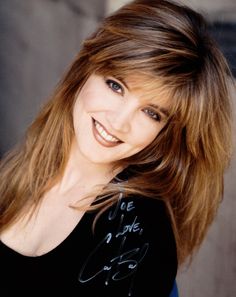 Albums: The Girl Next Door, Don’t Touch Me There

Crystal Bernard Facts:
*She is the daughter of the actor Jerry Wayne Bernard.
*Her elder sister, Robyn, is also an actress.
*Her career was began at age three, singing gospel music with her sister, Robyn.
*She played K.C. Cunningham on the hit sitcom Happy Days.