Cyrine Abdelnour is a singer, actress, and model from Beirut, Lebanon. She is best known for her hit single “Law Bas Fe Aini.” She has released four albums. Her debut album, Leila Min Layali, was released in 2004. As an actress, she has starred in Arabic TV serials and films since the late 1990s. Born in Beirut, Lebanon, in 1977, Cyrine began her modeling career in 1992. She modeled for the fashion designers Feliciana Rossi, Zuhair Murad, Abed Mahfouz, Renato Balestra, Mireille Dagher, and Thierry Mugler. She was awarded the title “Model of the World” at the Regency Palace Hotel in Beirut in 2002. She has been married to Farid Rahmeh since 2007. They have a daughter together. 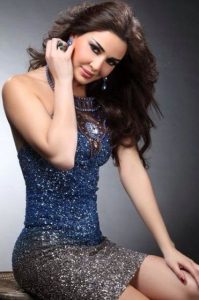 Cyrine Abdelnour Facts:
*Her father was Lebanese and works as a tailor, and her mother was Greek and works as a nurse.
*She began her modeling career in 1992.
*She considers Lebanese ‘honey’ Haifa Wahbi to be very beautiful and singer Maya Diab very elegant.
*Follow her on Twitter, Facebook, YouTube, Google+, and Instagram.