Lebanese singer and actress Haifa Wehbe was born Haifa Mohammed Wehbe on March 10, 1976 in Mahrouna, Lebanon, the daughter of Lebanese father Nadim Antar and an Egyptian mother from Cairo, to a Muslim family. She is known through her music, sex appeal and provocative mannerisms. Wehbe is one of the most notable singers in the Arab World and is considered one of the most successful Lebanese singers. She rose to prominence in the Arab world after being declared runner-up in the Miss Lebanon competition. In 2009, she married Ahmad Abu Husheima, an Egyptian businessman. The couple split in 2012. She was previously married to Nasr Fayyad. She has a daughter, Zeinab. Wehbe is with the height 5 feet 4 inches in tall. She wears a size 8 shoe and her zodiac sign is Pisces. 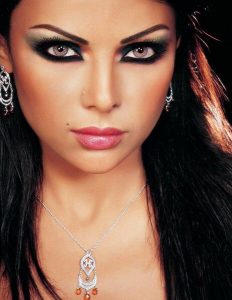