Puerto Rican reggaeton singer who rose to prominence with the release of his third studio album Barrio Fino in 2004, which earned him a Latin Grammy Award for Best Urban Music Album. His single, “Gasolina”, became the first reggaeton song to receive a nomination for a Latin Grammy Award for Record of the Year. In 2017, Daddy Yankee was featured on Luis Fonsi’s single “Despacito”, which became the first Spanish-language song to hit number 1 on the Billboard Hot 100 since “Macarena” in 1996. He has also collaborated with Katy Perry, Bad Bunny, Nicky Jam, DJ Playero, Ozuna, Don Omar, Natti Natasha and many more. Yankee has won 127 awards from 378 nominations. Born Ramón Luis Ayala Rodríguez on February 3, 1977 in Río Piedras, San Juan, Puerto Rico, to parents Rosa Rodriguez Ayala and Ramon Ayala, he was raised in the neighborhood of Villa Kennedy Housing Projects. At 12, Daddy Yankee began singing songs inspired by reggae and hip-hop. He made his debut on DJ Playero’s Playero 34 mixtape, released in 1991. He has been married to Mireddys Gonzalez since 1994. They have three children; daughters Yamilet and Jesaeelys and son named Jeremy. 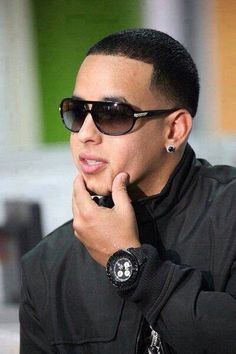 Daddy Yankee Facts:
*He was born on February 3, 1977 in Río Piedras, San Juan, Puerto Rico.
*Growing up, he wanted to become a professional baseball player.
*One of the top reggaetón (Spanish-language dancehall reggae) artists in Puerto Rico.
*He released his debut album, No Mercy, in 1995.
*He is the founder of Fundacion Corazon Guerrero, a charity which helps young incarcerated people.
*Big Daddy Kane, Bon Jovi, Michael Jackson, Nas, Sean Combs, Ruben Blades and Juan Luis Guerra are among his favorite celebrities/influences.
*He was part of the political campaign at the 2008 general elections in Puerto Rico.
*Time Magazine ranked him as one of the top 100 influencers in the world in 2006.
*Yankee had a fling with the American singer Paula DeAnda in the past.
*Visit his official website: www.daddyyankee.com
*Follow him on Twitter, YouTube, Facebook and Instagram.