Dakota Johnson, born October 4, 1989, is an American actress and fashion model. She was born Dakota Mayi Johnson in Austin, Texas, and is the daughter of actors Melanie Griffith and Don Johnson. She is best known for her television role as Kate Fox on Ben and Kate. She is also known for her role as Anastasia Steele in the 2015 film Fifty Shades of Grey. She has six siblings. On her mom’s side, Stella Banderas and Alexander Bauer, and on her father’s side, Jesse, Deacon, Jasper and Grace Johnson. 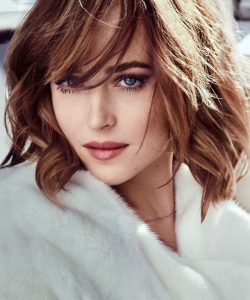 Dakota Johnson Favorite Things:
Her favorite song, on the Fifty Shades of Grey (2015) soundtrack, is “Beast of Burden” by The Rolling Stones.
Her favorite book is the 1955 novel, Lolita, by Vladimir Nabokov.
Her favorite color is orange.

Dakota Johnson Facts:
*She is the daughter of actors Don Johnson and Melanie Griffith.
*She was named Miss Golden Globe 2006.
*She’s An Animal Rights Activist.
*As a child, She was an avid dancer. She danced for twelve years, performing in ballets like The Nutcracker as well as other school plays.
*She made her film debut alongside her mom at age 10 in the 1999 film Crazy in Alabama.
*She became known for her supporting film roles on 21 Jump Street and The Social Network.
*Her ancestry includes English, Welsh, Swedish, German, Norwegian, Scots-Irish (Northern Irish), Irish, Scottish, and distant Dutch.
*Three things she always carries in her purse: keys, Chap-Stick and candy.
*She has a dog named Zeppelin.
*She deleted her private social media Instagram account and stopped posting pictures on her public account due to negative comments from internet trolls.
*She made a cameo appearance in the finale of The American Office.
*Her friends include Paris Hilton and Mary-Kate Olsen.