Patty Jenkins, born July 24, 1971, is an American film director and screenwriter best known for directing her debut feature Monster and the 2017 blockbuster Wonder Woman. Patricia was born in Victorville, California as Patricia Lea Jenkins. Her parents are William T. Jenkins and Emily Roth. She has two sisters, named Elaine Roth and Jessica Jenkins. She has been married to Sam Sheridan since 2007. They have a son together. 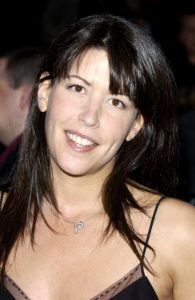 Patty Jenkins Education: AFI Conservatory, Cooper Union
*She attended the director’s program at the American Film Institute.
*She studied painting and received her undergraduate BFA at The Cooper Union in New York City.

Patty Jenkins Facts:
*She was raised in New York City.
*She is the daughter of a distinguished U.S.A.F. F4 fighter pilot who received the silver star while serving in the Vietnam war.
*She won a DGA award for Outstanding Directorial Achievement for a Dramatic Series for the pilot of The Killing.
*Follow Patty on Twitter.