Dan Brown is an American novelist who is best known for the 2003 bestselling novel The Da Vinci Code. His other notable works include Digital Fortress, Deception Point, Angels & Demons, The Lost Symbol and Inferno. His novels are written in a real time format, and are set over the course of 24 to 48 hours. Dan was born Daniel Gerhard Brown on June 22, 1964 in Exeter, New Hampshire, USA. 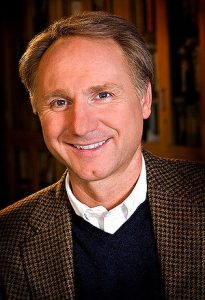 Dan Brown Facts:
*His mother is a musician and father is a math professor.
*He was placed number 10 in the 100 Celebrity list in 2006 by Forbes magazine.
*”The Lost Symbol” is the first of his books not to start with a murder.
*Forbes Magazine estimated his earnings for the year to be $10 million in 2007.
*Follow him on Twitter, Facebook and Instagram.

“If you ask three people what it means to be Christian, you will get three different answers. Some feel being baptized is sufficient. Others feel you must accept the Bible as immutable historical fact. Still others require a belief that all those who do not accept Christ as their personal savior are doomed to hell.” – Dan Brown