Dana Barron is an American actress. She is best known for her portrayal of Audrey Griswold in the 1983 film National Lampoon’s Vacation and Christmas Vacation 2: Cousin Eddie’s Island Adventure. For her role of Nikki Witt on Beverly Hills, 90210, she earned a Youth in Film Award, and won a Daytime Emmy Award in 1989 for her role in CBS’s No Means No. Born on April 22, 1966 in New York City, New York, USA, she is the daughter of theater actress Joyce McCord and commercial director Robert Barron. She and her younger sister, Allison, both appeared in commercials during their childhood years. She studied sculpture at The Art Students League of New York. She was in a long-term relationship with director and writer Michael Vickerman and they have a son named Taylor. 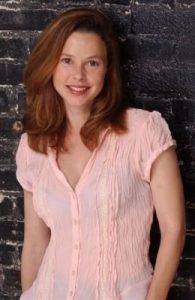 Dana Barron Facts:
*She was born in New York City, New York, USA on April 22, 1966.
*Her grandfather was an opera singer, and her mother moved from Alabama to become an actress.
*She performed on Broadway in Hide and Seek at age 11.
*Visit her official website: www.danabarron.net
*Follow her on Twitter and Facebook.