Lea Thompson is an American actress. She is best known for her portrayal of Lorraine Baines in the Back to the Future trilogy and Caroline Duffy in the 1990s sitcom Caroline in the City. She has also played prominent roles in the films All the Right Moves, Red Dawn, Howard the Duck, Some Kind of Wonderful, and The Beverly Hillbillies. She portrayed Kathryn Kennish in the Freeform series Switched at Birth From 2011 to 2017. The youngest of five children, Thompson was born as Lea Katherine Thompson in Rochester, Minnesota, on May 31, 1961. Her parents are Barbara Anne and Clifford Elwin Thompson. Her siblings are Coleen, Barry, Shannon, and Andrew. She attended Marshall-University High School (Minneapolis). She danced professionally at the age of 14. She left professional ballet in favor of an acting career. Thompson’s first role was as water skiing water show performer, she did not know how to water ski or even swim prior to being cast. She has been married to Howard Deutch since 1989. They have two daughters, Zoey and Madelyn. 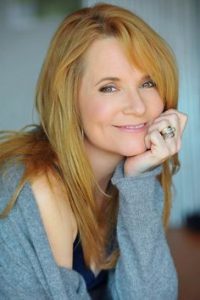 Lea Thompson Facts:
*She was born in Rochester, Minnesota on May 31, 1961.
*Her parents divorced when she was six years old.
*She won scholarships to the School of American Ballet and the American Ballet Theatre.
*She danced in more than 45 ballets with the ABT.
*She met her future husband Howard Deutch when he directed her in Some Kind of Wonderful in 1987.
*Follow her on Twitter, Facebook and Instagram.