Danai Gurira is an American actress and playwright. She is best known for her portrayal of Michonne on the AMC horror drama series The Walking Dead, and for her roles as Okoye in the Marvel Cinematic Universe superhero films Black Panther, Avengers: Infinity War, and Avengers: Endgame. From 2010 to 2011, Gurira portrayed the role of Jill in the HBO drama series Treme. Born Danai Jekesai Gurira on February 14, 1978 in Grinnell, Iowa, to parents Josephine and Roger Gurira, she has three older siblings; two sisters named Shingai and Choni, and a brother named Tare. She completed her schooling from Dominican Convert High School, a private Catholic school in Harare, Zimbabwe. She earned her Bachelor of Arts degree in Psychology in 2001 from Macalester College in Saint Paul, Minnesota. She also earned her Master of Fine Arts degree in Theatre from the Tisch School of the Arts, New York University. Gurira’s first televised acting role was in an episode of Law & Order: Criminal Intent (2004). 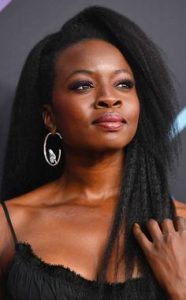 Danai Gurira Facts:
*She was born on February 14, 1978 in Grinnell, Iowa, USA.
*Her parents moved from Zimbabwe to the U.S. in 1964.
*She has two older sisters named Shingai and Choni, and one older brother named Tare.
*She wrote her first play when she was in 7th grade.
*She started her acting career in 2004.
*She speaks French, Shona, basic Xhosa, and English fluently.
*In 2011, she co-founded Almasi Arts Inc., an organization dedicated to supporting arts education in Zimbabwe.
*Visit her official website: www.danaigurira.com
*Follow her on Twitter, Facebook and Instagram.