Daniella Monet is an American actress and singer. She is best known for her portrayal of Trina Vega in the Nickelodeon comedy series Victorious from 2010 to 2013, and for her role as Megan Kleinman in the CBS short-lived sitcom Listen Up!. Monet’s other notable works include Zoey 101, 8 Simple Rules, Winx Club, Fred: The Show, Baby Daddy, Paradise Run, and Cousins for Life. She also provided the voice of Mitzi in the Nickelodeon series Winx Club. Born Daniella Monet Zuvic on March 1, 1989 in West Hills, California, USA, she is of Croatian and Spanish-Chilean descent on her father’s side, and of Italian descent on her mother’s side. She has one brother named Mario. Monet began her career appearing in television commercials and landed a role on the television series Pacific Blue (1997). In December 2017, Monet became engaged to Andrew Gardner, whom she had been dating since 2010. In April 2019, they announced that they were expecting their first child. 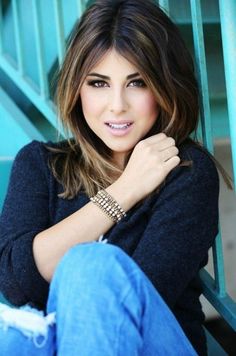 Daniella Monet Facts:
*She was born on March 1, 1989 in West Hills, California, USA.
*Her full name is Daniella Monet Zuvic.
*Her father’s family is from Chile.
*She played Trina Vega, Tori Vega’s older sister, in the hit teen series Victorious from 2010 to 2013.
*She is a vegan and supports animal welfare causes.
*She became a vegetarian at age 5 and vegan since the age of 13.
*She enjoys martial arts, boxing and dancing.
*She is a black belt in karate.
*She is a huge fan of Motocross.
*Visit her official website: www.daniellamonet.com
*Follow her on Twitter, YouTube, Facebook and Instagram.