Darby Stanchfield is an American television and movie actress. She is best known for portraying Abby Whelan on the ABC political drama series Scandal from 2012 to 2018. She is also known for roles such as April Green in Jericho, Helen Bishop in Mad Men, Shannon Gibbs in NCIS and Amelia Joffe in General Hospital. She has also appeared in the films Carnage Park, Medicine Men, The Rendezvous, Willie and Me, The Clinic, and Justine. Born Darby Leigh Stanchfield on April 29, 1971, in Kodiak, Alaska, her father, Paul Stanchfield, was a commercial fisherman. She graduated in 1993 from University of Puget Sound with a degree in Communications and a minor in theater. She received a Masters in Fine Arts from the American Conservatory Theater in San Francisco. She has been married to Joseph Gallegos since 2009. 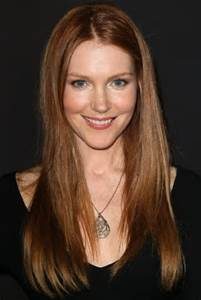 Darby Stanchfield Facts:
*She was born in Kodiak, Alaska on April 29, 1971.
*She is a 1993 graduate of University of Puget Sound.
*She is the niece of legendary Disney Studios animator, Walt Stanchfield.
*Visit her official website: www.darbystanchfield.com
*Follow her on Twitter, Facebook and Instagram.