Davey Allison was a NASCAR driver, best known for driving the No. 28 Texaco-Havoline Ford for Robert Yates Racing in the Winston Cup Series. He won the 1992 Daytona 500, a lifelong dream for a fearless dreamer. He won 19 races in 191 Winston Cup Series starts, including five in a 1992 season that nearly ended with a championship. Born David Carl Alexander Allison on February 25, 1961 in Hollywood, Florida, to parents Judy and Bobby Allison, he was the eldest of four children. He was immersed in the sport from an early age. He first raced in 1979 on a Birmingham, Alabama short track, scoring his first win in only his sixth start. He was married to Deborah Allison from 1984 to 1988 and Liz Allison from 1989 to 1993. He died of helicopter crash in Birmingham, Alabama at age 32. 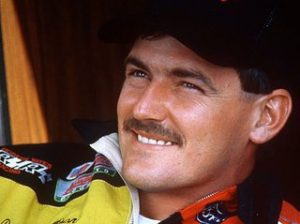 Davey Allison Facts:
*He was born on February 25, 1961 in Hollywood, Florida, USA.
*Son of 1983 Winston champion Bobby Allison.
*His brother, Clifford, was killed during NASCAR Busch Series practice at Michigan.
*Former member of the Alabama Gang.
*He began his career in 1979 at Birmingham International Raceway.
*He was named ARCA Rookie of the Year in 1984.
*He had debuted in the International Race of Champions (IROC) in 1992, but his injuries forced him to miss the last two races.
*He won a total of $6,726,974 in his Winston Cup career.
*He was named as one of NASCAR’s 50 greatest drivers in 1998.
*His hobbies were golf and flying.
*He was inducted into the Alabama Sports Hall of Fame in 1995.
*He was inducted into the International Motorsports Hall of Fame in 1998.