David Hyde Pierce is an American television, film and theatre actor and director. He is best known for his portrayal of psychiatrist Dr. Niles Crane on the NBC sitcom Frasier, for which he received 11 Primetime Emmy Awards nominations for Outstanding Supporting Actor in a Comedy Series and 4 wins during the show’s run. Pierce starred as the befuddled astrophysicist, Prof. Henry Newman in the 2001 comedy film Wet Hot American Summer, and won the 2007 Tony Award for Best Performance by a Leading Actor in a Musical for his performance in Curtains. He has also done voice work in A Bug’s Life, The Tangerine Bear, Osmosis Jones, Treasure Planet, Mighty Ducks, Happily Every After, The Simpsons, Gary the Rat, and The Amazing Screw-On Head. In 2015, Pierce directed the Broadway musical It Shoulda Been You. Born David Pierce on April 3, 1959 in Saratoga Springs, New York, to parents Laura and George Hyde Pierce, his siblings are Nancy, Thomas, and Barbara. Pierce attended Saratoga Springs High School, and graduated from Yale University in 1981 with a double major in English and theater arts. He is married to writer and producer Brian Hargrove. 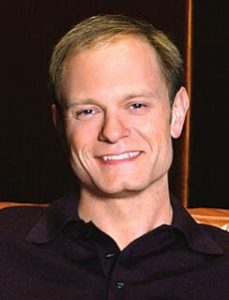 David Hyde Pierce Facts:
*He was born on April 3, 1959 in Saratoga Springs, New York, USA.
*He studied at Yale University.
*Played Dr. Niles Crane in Frasier from 1993–2004.
*He is openly gay.
*He plays both the piano and the organ.
*He once worked as a security guard.
*He kickboxes.
*He married Brian Hargrove in October 2008.