Debbie Harry is an American singer-songwriter and actress. She is best known as the lead vocalist and songwriter for the punk rock/New Wave group Blondie, whose hit songs include ‘Rapture’, ‘Call Me’, ‘Heart of Glass’ and ‘The Tide Is High’. She recorded several worldwide number one singles with Blondie during the 1970s and 1980s. Born Angela Tremble on July 1, 1945 in Miami, Florida, she was adopted by Catherine and Richard Smith Harry, and grew up in Hawthorne, New Jersey. She was educated at Hawthorne High School and Centenary University. She was in long-time relationship with Chris Stein. 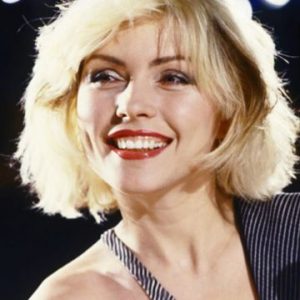 Debbie Harry Facts:
*She was adopted by Catherine and Richard Smith Harry at 3 months.
*She was named at #12 on VH1’s 100 Greatest Women of Rock and Roll in 1999.
*She was listed at #18 on VH1’s 100 Sexiest Artists.
*She worked as a waitress, a go-go dancer, and a Playboy bunny.
*She is friends with Bette Milder.
*Follow her on Twitter and Myspace.