Debbie Reynolds was an American actress and singer best known for her role as Kathy Seldon in the 1952 classic Singin’ in the Rain. She played Helen Kane in the 1950 film Three Little Words, for which she was nominated for the Golden Globe Award for Most Promising Newcomer. Her other films include Tammy and the Bachelor, The Tender Trap, The Unsinkable Molly Brown, The Affairs of Dobie Gillis, Susan Slept Here, and The Catered Affair. She is the mother of actress and writer Carrie Fisher. 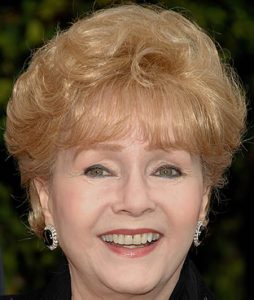 Debbie Reynolds Facts:
*Her ancestry included English, some Scottish, Scots-Irish (Northern Irish), and German, and distant French.
*She won the Miss Burbank beauty contest at the age of 16.
*She had planned to go into the education field before she won the Miss Burbank contest.
*Friends with Jane Powell; they share the same birthday.