Carrie Fisher was an American actress, novelist, screenwriter, and performance artist who was best known for her portrayal of Princess Leia Organa in the original Star Wars trilogy, and will reprise the character in Star Wars: The Force Awakens. She was also also known for her bestselling novel Postcards from the Edge and screenplay for the film of the same name. She was born Carrie Frances Fisher to singers/actors Eddie Fisher and actress Debbie Reynolds. She was married to Paul Simon from 1983 to 1984. She was once engaged to Dan Aykroyd. Her daughter Billie Catherine Lourd also became an actress. She died on December 27, 2016 at the age of 60 due to a heart attack. 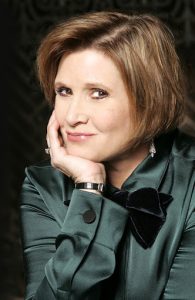 Carrie Fisher Education:
Attended the Central School of Speech and Drama in London.

Carrie Fisher Facts:
*She weighed 7 lbs 2 ozs at birth.
*She accomplished a 35-pound weight loss in her preparation for Star Wars: The Force Awakens (2015).
*She was best friends with Richard Dreyfuss.
*She was good friends with Courtney Love, and Stephen Fry.
*Her father, Eddie Fisher, left her mother, Debbie Reynolds, when Carrie was two years old in order to marry Elizabeth Taylor.