Deborah Cox, born July 13, 1974, is a Canadian R&B singer-songwriter and actress whose hit single “Nobody’s Supposed to Be Here” held the record for longest-running number one single on Billboard’s Hot R&B/Hip-Hop Singles & Tracks chart at 14 weeks, a record held for nearly eight years. Deborah was born in Toronto to parents who hailed from Guyana, South America. She has been married to Lascelles Stephens since 1998. She has two daughters named Sumayah and Kaila Michelle and a son named Isaiah. 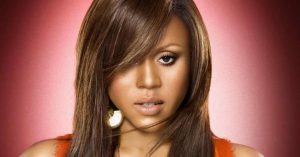 Deborah Cox Facts:
*At age 12, she began singing on TV commercials.
*Her hit single “Absolutely Not” was featured in Dr. Dolittle 2, which starred Eddie Murphy.
*Her hit song “Nobody’s Supposed To Be Here” was originally written for Patti LaBelle.
*Follow her on Twitter, Facebook, YouTube, Myspace and Instagram.