American rapper who was a member of SpaceGhostPurrp’s hip hop group, Raider Klan from 2012 to 2013. Curry released his debut studio album, Nostalgic 64, on September 3, 2013. In June 2015, he released his first double EP 32 Zel/Planet Shrooms, which contained his breakout single “Ultimate”, which has since amassed over 100 million streams on Spotify. His third studio album, Ta13oo, debuted at number 28 on the Billboard 200 chart. 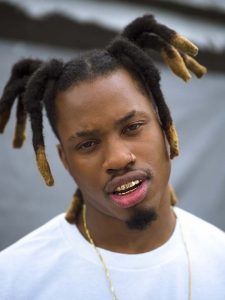 Born Denzel Rae Don Curry on February 16, 1995 in Carol City, Florida, both of his parents are of Bahamian descent. Curry started rapping while in sixth grade and began working on his first mixtape in 2011. He attended Design & Architecture High School his first two years of high school.

He is of Bahamian descent through both his mother and father.

Curry attended Miami’s Design and Architecture High School for two years before being expelled. He then attended Miami Carol City Senior High School, where he started working on Nostalgic 64 while still attending class

Denzel Curry Facts:
*He was born on February 16, 1995 in Carol City, Florida, USA.
*He had a brother named Treon who died in police custody in 2014.
*He first picked up the pen at age 12 to make music and art.
*He released his debut mixtape King Remembered Underground Tape 1991–1995 in September 2011.
*In 2012, Curry became a member of SpaceGhostPurrp’s Raider Klan collective, which he left in 2013.
*Visit his official website: www.denzelcurry.com
*Follow him on Twitter, SoundCloud, YouTube and Instagram.