Desi Lydic is an American comedian and actress best known for her role as guidance counselor Valerie Marks on the MTV series Awkward. Desi is a correspondent on The Daily Show with Trevor Noah, hosted by Trevor Noah. Her other well-known television credits include CBS’s “The Odd Couple,” CBS’s “Two and a Half Men” and FXX’s “The League.” She has also played prominent roles in the films Stan Helsing, We Bought a Zoo and The Babymakers. Born Lani Desmonet Lydic on June 30, 1981 in Summit, New Jersey, to parents Onalee Reith Peterson and Jack Edward Lydic, Desi was raised in Louisville, Kentucky. She studied and performed at The Groundlings and Improv Olympic. She made her acting debut in the 2001 parody film Not Another Teen Movie. On September 13, 2014, she married Gannon Brousseau with whom she has one son. 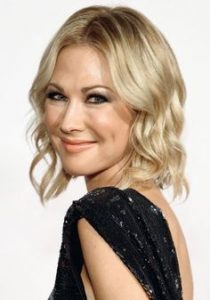 Desi Lydic Facts:
*She was born in Summit, New Jersey, USA on June 30, 1981.
*She graduated from Youth Performing Arts School.
*She began her acting career with the 2001 parody film Not Another Teen Movie.
*Visit her official website: www.desilydic.com
*Follow her on Twitter and Instagram.