Devon Aoki is an American actress and fashion model who started modeling at the age of thirteen and was introduced to modeling legend Kate Moss by her godmother. Aoki made her runway debut in 1997 and walked for brands including Comme des Garçons, Balenciaga and Chanel. At 16, she replaced Naomi Campbell as the face of Versace. Aoki has appeared in campaigns for many important fashion houses such as Yves Saint Laurent, Chanel, Kenzo, Tiffany & Co., Hugo Boss, Lancome and L’Oreal, and has worked with top designers like Jean Paul Gaultier, Versace, Chanel, Oscar de la Renta, Diane von Furstenberg, Celine, Baby Phat, and Marc Jacobs. Aoki has also appeared on the cover of fashion magazines such as Vogue (Germany, Russia, Korea, Japan), Numéro Tokyo, US’ Ocean Drive, Vegas, Nylon, i-D, Interview, Elle Girl and UK’s Wonderland, Korea’s CosmoGirl, France’s Jalouse, Australia’s Russh and 10 Magazine, Japan’s Voce and Harper’s Bazaar, and Malaysia’s Her World. As an actress Aoki has appeared in films 2 Fast 2 Furious, Sin City, D.E.B.S., Dead or Alive, War, Mutant Chronicles and Rosencrantz and Guildenstern Are Undead. Born Devon Edwenna Aoki on August 10, 1982 in New York City, New York, she is the daughter of Pamela Hilburger and Rocky Aoki and half-sister to musician Steve Aoki. She is of Japanese descent on her father’s side, and of English and German descent on her mother’s side. Aoki was raised in California and earned her high school education from The American School in London. She is married to James Bailey with whom she has a son and two daughters: James Hunter, Alessandra Linville, and Eleanor Talitha. 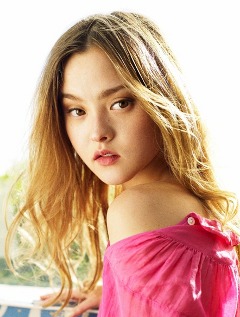 Devon Aoki Facts:
*She was born on August 10, 1982 in New York City, New York, USA.
*Her father was a former wrestler who also founded the restaurant chain Benihana.
*Her half-brother is musician Steve Aoki.
*She was educated at The American School in London.
*In 1998, she replaced Naomi Campbell as the face of Versace.
*She is considered as an icon in the fashion industry by models.com.
*Aoki wears a size 7.5 (US) shoe.
*Follow her on Twitter and Instagram.