Diana Karazon is an Arabic pop star who rose to fame in 2003, winning the Arabic version of Pop Idol called Superstar. She was the only contestant at World Idol 2003 to sing in her native language. She has established herself as one of the most successful singer in the Arab world. Her hit single include, “Shahrein,” “Kazzeb Alayi,” and “Webada’t A’eish.” The Jordanian star was born in Kuwait, and was raised in Amman, Jordan. She has Palestinian and Jordanian ancestry. Her father was a musician and a member of Jordanian artists association. She has a son, Sameeh Karazon. She has three siblings; one brother named Daoud and twin sisters named Haya and Zain. 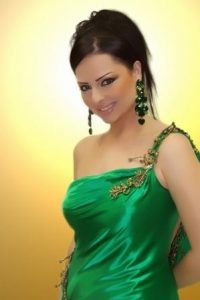 Diana Karazon Facts:
*She was the winner of the talent show “Superstar Academy’s” first season.
*She began singing at the age of 6.
*She is a big fan of George Wassouf and Umm Kulthum as she was singing her songs since she was a child.
*Follow her on Twitter, Facebook, YouTube, and Instagram.