Dita Von Teese is an American vedette, burlesque dancer, model, businesswoman, and actress. She is best known for her burlesque routines and is frequently dubbed the “Queen of Burlesque” in the press. Von Teese posed for the December 2002 issue of Playboy magazine. She was photographed by her then-future husband, Marilyn Manson. 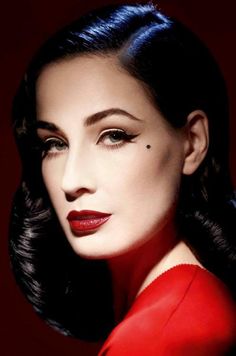 Born Heather Renée Sweet on September 28, 1972 in Rochester, Michigan, to parents Bonnie Lindsey and Ken Sweet, she is of Armenian, English, German, and Scottish descent. Von Teese has an older sister named Jennifer and a younger sister named Sarah. She was educated at University High School in Irvine, California. Von Teese began performing burlesque in 1992, and, as a proponent of Neo-Burlesque, has helped to popularize its revival. She was married to shock rocker Marilyn Manson from 2005 to 2007. In 2014, Von Teese began dating graphic designer Adam Rajcevich.