Dove Cameron is an American actress and singer. She is best known for her role as Liv/Maddie Rooney in the Disney Channel sitcom Liv and Maddie, which aired from 2013 to 2017. In 2015, she appeared as Mal in the Disney Channel Original Movie, Descendants and reprised her role in its 2017 sequel, Descendants 2. Dove will once again play Mal for Descendants 3 (2019). She earned musical theater acclaim for her role of Amber Von Tussle in the NBC live television presentation of Hairspray Live!, which aired on December 7, 2016. Born Chloe Celeste Hosterman on January 15, 1996 in Seattle, Washington, USA, to Philip Alan Hosterman and Bonnie Wallace, she has an older sister named Claire Hosterman. She started acting at the age of eight in community theater. When Dove was 14, her family moved to LA, California, where she sang in Burbank High School’s National Championship Show Choir. In August 2013, she began dating actor and singer Ryan McCartan, and got engaged on April 14, 2016. They broke up in October 2016. In late 2016, she began dating her Descendants 2 co-star Thomas Doherty. 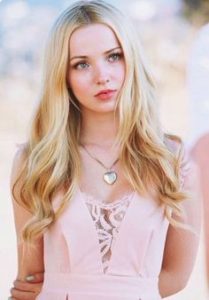 Dove Cameron Facts:
*She was born on January 15, 1996 in Seattle, Washington, USA.
*She began her acting career as a teen.
*Her father died in 2011 when she was 15.
*She legally changed her first name to Dove in honor of her father who called her by that nickname.
*She speaks French fluently.
*She’s a Hamilton fan.
*The Elephant Man (1980) and Pan’s Labyrinth (2006) are her favorite movies.
*She has a cat named Fern.
*Visit her official website: www.dovecameron.com
*Follow her on Twitter, YouTube, Facebook and Instagram.