American professional basketball player who plays for the Charlotte Hornets of the National Basketball Association. He was a star with the Orlando Magic and helped lead the team to the NBA Finals in 2009. He began playing with the Los Angeles Lakers in 2012. Howard was born Dwight David Howard on December 8, 1985 in Atlanta, Georgia, to Dwight Howard Sr. and Sheryl Howard. He had a son, Braylon in 2007, with his girlfriend Royce Reed. 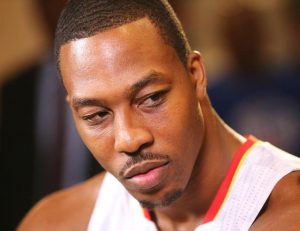 Dwight Howard Facts:
*He is a devout Christian.
*His high school was SW Atlanta Christian Academy.
*He was named to the NBA’s All-Rookie First team in 2005.
*He earned him three straight NBA Defensive Player of the Year Awards from 2009 to 2011.
*He is a big fan of professional wrestling.
*His favorite singer is Alicia Keys.
*Follow him on Twitter, Google+, Facebook and Instagram.