Filipino-American professional basketball player who plays for the Los Angeles Lakers of the National Basketball Association. He played college basketball for two seasons with University of Tulsa before transferring to University of Missouri. He was born to Mike Clarkson and Annette Davis on June 7, 1992 in San Antonio, Texas, United States as Jordan Taylor Clarkson. He is of African-American descent on his father’s side, and of Filipino descent on his mother’s side. 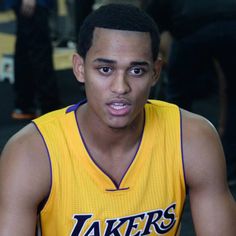 Jordan Clarkson Facts:
*He belongs to African-American and Filipino descent.
*In 2014, he made his NBA debut as a member of the Los Angeles Lakers.
*He is both a point guard and shooting guard.
*He was romantically linked to American model Kendall Jenner.
*Follow him on Twitter, Facebook and Instagram.