Dylan Sprayberry is an American actor. He is best known for his roles as 13-year-old Clark Kent in the 2013 film Man of Steel, and Liam Dunbar on the MTV series Teen Wolf. In 2018, he began portraying the role of Henry Richmond in the Hulu thriller series Light as a Feather. Born Dylan Muse Sprayberry on July 7, 1998 in Houston, Texas, to parents Dana and Carl Sprayberry, he has a younger sister, Ellery Sprayberry, who is also an actress. He was educated at West University Elementary and Brighton Hall. In 2017, he began dating Samantha Logan. 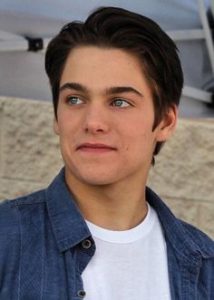 Dylan Sprayberry Facts:
*He was born on July 7, 1998 in Houston, Texas, USA.
*He started his career at the age of 9.
*He played Liam Dunbar on the MTV series Teen Wolf from 2014 to 2017.
*He is left handed.
*He plays the guitar, drums, and bass and, was in a band called The Dead Toms.
*He is a fan of punk rock and cites his favorite bands as Minor Threat, The Stooges, Neck Deep, Black Flag, The Story So Far, and Blink-182.
*He is good friends with Mason Dye.
*He cites Sean Penn, Joaquin Phoenix, Jack Nicholson, Robert De Niro, Tom Hardy, and Jake Gyllenhaal as his inspirations.
*Follow him on Twitter, Facebook and Instagram.