Eartha Kitt was an American singer and actress best known by the public for her hits like ‘C’est Si Bon’, and holiday song ‘Santa Baby’. She played Catwoman in the 1960’s TV show Batman. She has won three Emmy Awards, including a posthumous one for The Wonder Pets. She was nominated in 1996 for a Grammy Award in traditional pop vocal performance for her album “Back in Business”. She was born Eartha Mae Keith on January 17, 1927 in South Carolina to an African American mother and a white father. She married William O. McDonald in 1960, and the couple had a daughter named Madison in 1961 before getting divorced in 1965. She died of colon cancer in her home in Weston, Connecticut, on Christmas Day 2008. 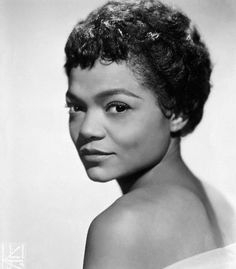 Eartha Kitt Facts:
*She was raised by Annie Mae Keith, a black woman whom she believed to be her mother.
*She was ranked #89 on VH1’s 100 Greatest Women of Rock N Roll.
*She replaced Julie Newmar as Catwoman on television.
*She once called her the ‘most exciting woman in the world’.
*She was a staunch liberal Democrat.
*She was good friends with Dick Gregory, and Freda Payne.
*Website: www.earthakitt.com