Coco Vandeweghe is an American professional tennis player who achieved her career’s best ranking on September 11, 2017, which was #16. She turned professional in 2008. She reached the quarterfinals of both the 2015 and the 2017 Wimbledon Championships and the semifinals of the 2017 US Open and the 2017 Australian Open. Coco was born Colleen “CoCo” Vandeweghe, on December 6, 1991 in New York City, New York, USA to Olympic swimmer Tauna Vandeweghe and Robert Mullarkey. She was only 11 when she started playing tennis with her elder brother, Beau. 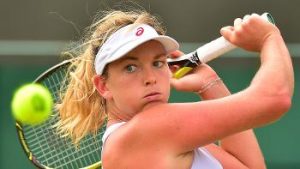 Coco Vandeweghe Facts:
*At age 11, she started playing tennis with her older brother, Beau.
*She turned professional in 2008.
*She won 2008 US Open junior title, without dropping a set.
*She is the niece of NBA executive Kiki Vandeweghe.
*She is good friends with fellow American players Shelby Rogers, Irina Falconi and Madison Keys.
*Follow her on Twitter, Facebook and Instagram.