English Singer/songwriter Ed Sheeran who rose to fame after his hit 2011 song “The A Team.” He is also known for hit single like “Photograph” and “Thinking Out Loud,” which earned him two Grammy Awards for Song of the Year and Best Pop Solo Performance. Ed Sheeran was born Edward Christopher Sheeran on February 17, 1991 in Yorkshire, England, the son of John Sheeran and Imogen Sheeran. He belongs to Irish and English descent. He has an older brother, Matthew, who is also a singer. 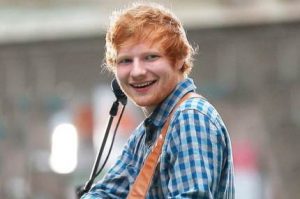 Ed Sheeran Facts:
*His family moved to Framlingham in Suffolk when he was a child.
*He has named all four of his guitars: Felix, Cyril, Nigel, and Loyd.
*He is a big fan of Buffy the Vampire Slayer (1997).
*He owns a farm in Framlingham, Suffolk, England.
*Follow him on Twitter, Facebook, YouTube, Google+, and Instagram.